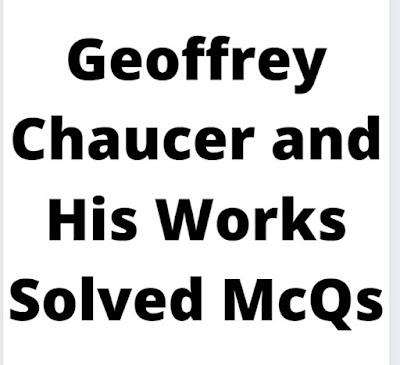 Geoffrey Chaucer was born sometime between 1340 and 1345, most likely in London. He was the son of a successful wine merchant. In 1357, he became page to Edward III’s daughter-in-law. The king then sent him on diplomatic missions abroad. On his journeys he would have seen the works of foreign authors such as Dante.

Chaucer held many positions. He was controller of London Customs, MP for Kent, a justice of the peace and clerk of the king’s works in charge of royal building work, under Edward III and Richard II. In addition to this he also wrote many poems. His most famous work of all is without doubt The Canterbury Tales. Historical records of Chaucer disappear around 1400 and this is the presumed date of his death. He was buried in Westminster Abbey, the first person in Poets’ Corner.

1-How much do you know about Geoffrey Chaucer? Find out in this quiz on his life and works.

In which century was Chaucer born?

2-What is the title of Chaucer’s best-known work?

The Book of the Abbess

The Book of the Countess

The Book of the Duchess 👈🏿

The Book of the Governess

It is thought that Chaucer wrote the poem to commemorate the death of Blanche, daughter of the Duke of Lancaster and the wife of John of Gaunt

4-In The Canterbury Tales, what is the name of the inn where the pilgrims meet before their journey?

The inn was real. It was built in 1307 and stayed in business for over 500 years

5-Chaucer’s father and grandfather were both what?

6-What name is now given to the language in which Chaucer worked?

Middle English was spoken from 1066 until the 15th century

7-Which character in The Canterbury Tales is a little deaf following a blow to the head from one of her husbands?

The Wife of Bristol

The Wife of Dorchester

The Wife of Exeter

The Wife of Bath tales the take of a knight who is set the quest to answer the riddle “what is it that women most desire?” He succeeds in his task when he finds the answer “sovereignty over their husbands”

8-Which is the first of The Canterbury Tales?

9-Which of the tale tellers has a conspicuous hairy wart?

He also likes breaking down doors with his head!

10-Chaucer served in the English army under which king?

In 1360 Chaucer was captured during the siege of Reims and taken prisoner. Edward paid a ransom of £16 (a good deal of money at the time) for his release

4. WHICH NOVELIST IS TAGGED WITH PSYCHOLOGICAL NOVELIST?

15.EMOTION , SPIRITUAL AND RELIGIOUS EXPERIENCE OF A CHARACTER IS CALLED _________

17.WHO HAS BEEN CALLED THE LAST EXQUISITE BLOSSOM OF THE 18TH CENTURY?

Mill on the Floss

19.HOW MANY NOVEL WAS WRITTEN BY JANE AUSTEN?

20.FIRST IMPRESSION WAS THE TITLE GIVEN TO___

21.WHO IS THE HERO OF PRIDE AND PREJUDICE?

Elegy – by the poet – On the death of