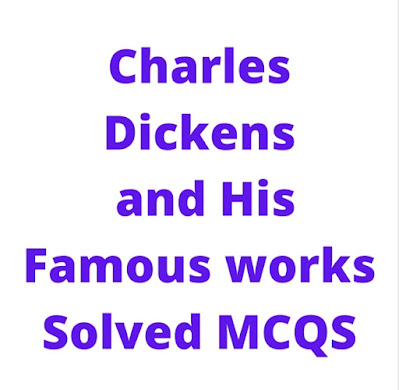 Charles Dickens is perhaps the most important of all the Victorian writers. He was a master at describing contemporary society, and his works were a form of social commentary. One quiz is not enough to do justice to such a literary giant as Dickens, and so this is the first of four quizzes devoted to his life and his works.

Dickens was born in Portsmouth in 1812. He was sent to school at the age of nine, but unfortunately this came to an end when his father was sent to a debtor’s prison. Charles was sent to work in a factory where he had to put up with terrible conditions as well as separation from his family. After three years he went back to school, but the incident had an effect on Dickens who used it as inspiration in some of his books, most notably in Great Expectations and David Copperfield.

Test your knowledge of the life and works of Charles Dickens in this, Who was the hero in Great

Pip is a nickname. The character’s real name is Philip Pirrip

Of which newspaper was Charles

The News Of The World

3-What institution was featured prominently in the Charles Dickens novel Oliver Twist?

Workhouses were a feature of Victorian society. Life in them was deliberately harsh, so that only the truly destitute would apply

4-Which novel did Charles Dickens complete in 1853?

5-Which Charles Dickens novel is named after a father and son?

The book’s full title is Dealings with the Firm of Dombey and Son: Wholesale, Retail and for Exportation

6-What seasonal work did Charles Dickens produce in 1843?

7-Which mean character appeared in A Christmas Carol by Charles Dickens?

The Chancellor Of The Exchequer

8-Which adjective describes a similarity to a Charles Dickens character or situation?

9-Which English period was covered by the majority of works by Charles Dickens?

Some of Dickens’ work referred to the 18th century, but the Victorian period was his primary focus

10-Whose team of pickpockets appeared in the Charles Dickens novel Oliver Twist?

This is the second in our series of four quizzes on the classic Victorian author, Charles Dickens – the creator of some of literature’s most well-known and best loved characters. From the nasty villain to the innocent child, the comical to the tragic, Dickens characters come to life in the minds of his readers.

Dickens’ literary career began in the world of journalism. He started writing for the journals The Mirror of Parliament and The True Sun before he was made the parliamentary journalist for The Morning Chronicle newspaper. From here his career began to pick up and Sketches by Boz, collection of short works written under an assumed name was published in 1837. His first novel, The Pickwick Papers, was published around the same time and Dickens success bloomed.

How well do you know the life and works of Charles Dickens?

1For what was Charles Dickens’ father imprisoned in 1824?

Getting into debt carried quite a stigma in 19th century Britain, as imprisonment was common

2-In 1832 what did Charles Dickens nearly become?

3–What nom de plume did Charles Dickens use?

4–Which Dickens novel features scenes from The French Revolution?

The two cities in the title are London and Paris

5-In which Dickens novel was the death of Little Nell featured?

The story is the tragic tale of Nell Trent and her grandfather, and their journey away from misery

6-What was the first name of Charles Dickens’ wife?

Charles and Catherine had 10 children together

7-In which Dickens novel did the character Mr Micawber appear?

The character, known for his phrase “something will turn up”, has become synonymous with a person who lives in hopeful expectation

8-Which of Charles Dickens’ works remained unfinished at the time of his death?

A Tale Of Two Cities

The Mystery Of Edwin Drood👈🏿👈

As the book was not finished Drood’s killer is not revealed. His uncle, John Jasper, is the most likely murderer but no-one can be certain

Where in England was the author Charles Dickens born?

Though Dickens was born in Portsmouth, the family moved to London when he was 3 years old

1-Boffin, Wegg and Venus were characters in which Dickens novel?

Our Mutual Friend was the last novel Dickens managed to complete

2-The line “Barkis is willing” comes from which Dickens work?

A Tale Of Two Cities

This was the message to Clara Peggotty

3-In Martin Chuzzlewit by Dickens what were the names of Pecksniff’s daughters?

The correct answer is Charity and Mercy

4-Who was “The Infant Phenomenon” in “Nicholas Nickleby” by Dickens?

5-Where is the author Charles Dickens buried?

Dickens lies in poets’ corner along with the likes of Geoffrey Chaucer, Dr Samuel Johnson, Alfred Tennyson and Thomas Hardy

He began the work when he was just 24 years old

7-What was Charles Dickens’ Christmas story in 1861 called?

The short story shares its name with a children’s game in which one player, “Tom Tidler,” tries to keep other players off a patch of ground

What age was Charles Dickens

9-Which of Charles Dickens’ novels is considered to have been partly autobiographical?

The full title of the novel is The Personal History, Adventures, Experience and Observation of David Copperfield the Younger of Blunderstone Rookery (Which He Never Meant to Publish on Any Account)

10-Who in the 19th century was Ellen Ternan?